Brent crude futures were primed for their biggest monthly rise since May 2009 on the back of upbeat demand that coincided with supply disruptions in big oil producing countries.

Ice April Brent rose $1.10 to $61.15 a barrel in Friday afternoon trading. After seven months of losses, the international crude marker is up 15 per cent in February — the highest monthly rise in almost six years.

Its US counterpart, Nymex April West Texas Intermediate, increased by $1 to $49.19 a barrel. It is also set for its first monthly gain since June with a small rise of 2 per cent.

Lower prices have induced demand from buyers in Europe and China, said Olivier Jakob of Petromatrix, a consultancy.

“Strong demand for products such as gasoline and diesel is boosting demand for crude from refiners as they are seeing stronger margins,” he said.

“There is some fundamental support this month. But it is always difficult to tell if we’ve turned a corner [when it comes to underlying demand],” he added. “A lot of people are still just stockbuilding.”

But after dropping by 60 per cent to nearly $45 a barrel last month, Brent crude has rebounded. 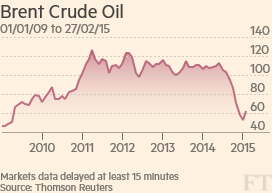 This month, supply disruptions in Iraq and Libya have also offered some support to the price.

Oil exports from the country’s southern fields dropped earlier this month as poor weather held up shipments. Meanwhile, unrest in Libya, where fighting has shutdown ports and oilfields, has also curbed production.

But a stronger Brent market has coincided with still relative weakness in WTI, widening the spread between the two crudes to around $12 a barrel — the biggest it has been since January 2014.

Stocks at Cushing, Oklahoma, the delivery point for WTI, have been rapidly increasing and stand at record levels.

This has increased the contango — industry jargon for when prices for delivery in the future are higher than in the spot market in US crude.

This is the steepest the so-called front month and next month contracts have been since February 2011.

“This is likely to continue in the coming weeks, partly because the pronounced contango in the WTI forward curve continues to make it attractive to stockpile in the US,” said Carsten Fritsch at Commerzbank.

But the recent strength in Brent crude has meant a popular trading strategy of buying oil on the cheap to store on tankers and locking in earnings when prices rise has become less profitable, according to traders.

“Oil market dynamics are changing,” said Paul Horsnell at Standard Chartered. “If you look at the three-month trend, it is becoming positive.

“Has the oil price bottomed? It probably has but it is very volatile. We went from a one-way street downwards, to two-way traffic, and now the path of least resistance is up.”

What a new government in Spain means for Catalonia

Catalonia is an inclusive country, a civic republic

UN:Conflict has increased food insecurity in the Near East

The political economy of restructuring the Nigerian federation

BIAFRA: BRUCE FEIN IS NOW THE EXECUTIVE DIRECTOR OF THE ...

NEWS:WHY I WILL OBSERVE IPOB’S SIT-AT-HOME ORDER IN REMEMBRANCE OF BIAFRA...

ABOUT US
Biafra24 News and Radio broadcasts to the world on the issue of Biafra Restoration Project and Beyond. We are dedicated to the core of the struggle.
Contact us: [email protected]
FOLLOW US
© Copyright @2017. All rights reserved Biafra24.
MORE STORIES

The political economy of restructuring the Nigerian federation